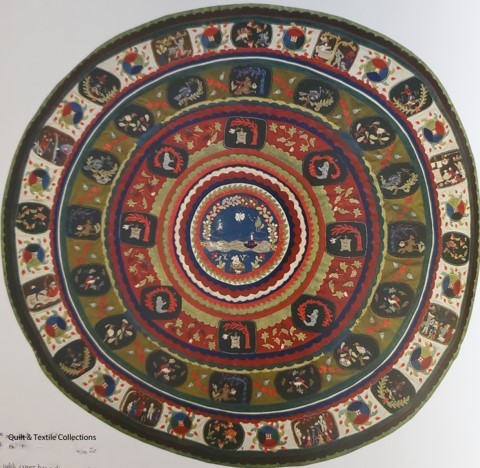 This is our final blog on the American Military Textiles, and it focuses on the pictorial style. To date three pictorial American Military textiles have been uncovered. The earliest is a table cover from Vevay, Indiana and depicts events from the founding of Vevay by Swiss immigrants. Research on this table cover is what inspired research into this group of textiles.

Initially added to the Poos Collection in 2015, we connected with Annette Gero for guidance on this pictorial. Annette immediately identified the two panels associated with the story of Wilhelm Tell. From there, The Triplett Sisters continued the hunt to find an early Swiss Colony in America which matched the 41 different scenes detailed in the table cover. For detailed information on this textile please see our book “Hidden Treasures” at this link. 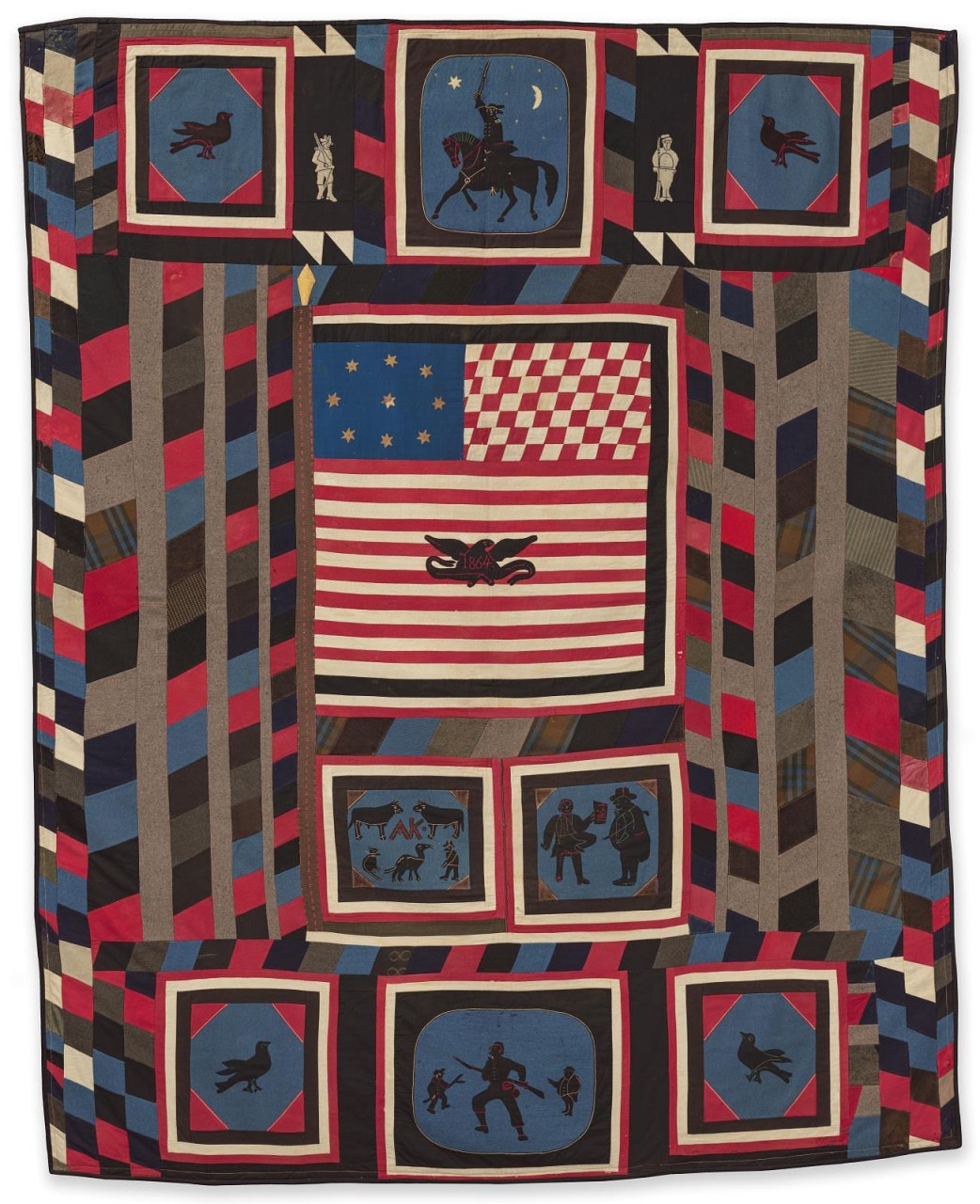 The Civil War Zouave Quilt Top was probably made at the Schuykill Arsenal in Philadelphia which provided supplies to the US military including uniforms. More than 10,000 contract seamstresses and tailors were hired to create uniforms, blankets, and tents. The quilt top was made from wool suiting and pieces of Zouave uniform cloth. The Zouave (originally comprised of Berber troups from Algiers) units were raised and fought on both sides of the American Civil War and were involved in all the major Civil War Battles. 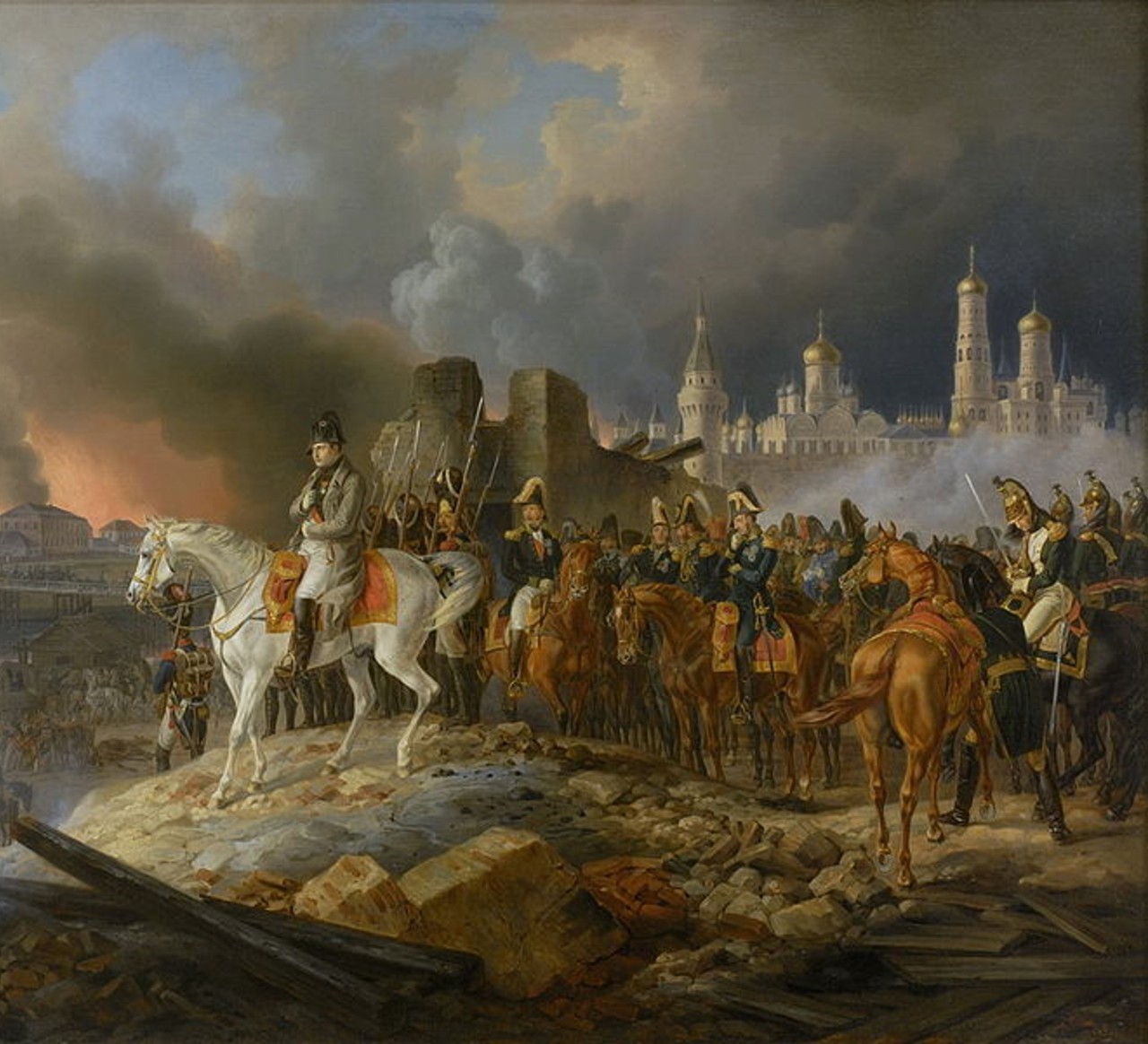 The most recently made pictorial American military textile is Napoleon’s Retreat from Moscow Piece-Picture. The description of the piece comes from Willa Cather’s Book, “The Song of the Lark.” Although she described the textile in a novel, Willa Cather later stated in a letter that the “pieced picture” really did exist and she remembered “it hung in the fitting room of a German ‘Ladies Tailor’ in the East End” Pittsburg, Pennsylvania. In another note, Cather wrote to her friend, Helen Seibel, that the pieced picture was made by a tailor named Wiseman.

I hope you’ve enjoyed this brief glimpse into American Military Textiles. If you’d like to learn more details about these textiles and the history, a virtual class will be taught in February at the AQSG Virtual Seminar (more details will be coming soon.)