Oh, Say Can You See By the Dawn's Early Light...

I probably should have saved this blog for the week of Flag Day or some other holiday, but one of the special exhibitions at the recent AQS QuiltWeek caught my eye. Presidential and Patriotic Quilts from the collection of Sue Reich had two quilts that fascinated me. The first quilt was the Centennial Flag Banner Quilt 1876, 76” x 82” contained fabric with a patent date of December 28, 1875. 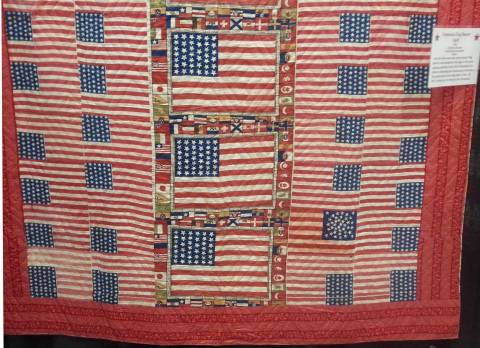 Although patriotic themed textiles had been popular in America for some time, fabric companies ramped up production on many new fabrics related to the Centennial Exposition of 1876. The exposition held in Philadelphia was something I’d just been researching because of a quilt in our next book, Pioneer Quilts. Officially named the International Exhibition of Arts, Manufactures and Products of Soil and Mine, considered the first “US World’s Fair,” it was given the broader name to attract attendees from other countries. This fair would also have the first “Women’s Pavilion” with Elizabeth Duane Gillespie (great granddaughter to Benjamin Franklin) selected as the president of the Women’s Centennial Committee. 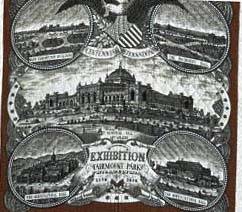 The Smithsonian Institution also has a beautiful quilt by Esther Cooley which contains the flag banner fabric as well as a printed textile of Memorial Hall Art Gallery. Companies also printed textile souvenirs of the various different buildings in Fairmont Park the exposition site in Philadelphia. Besides the different buildings, the souvenirs were also available in different colorways for viewing see here. 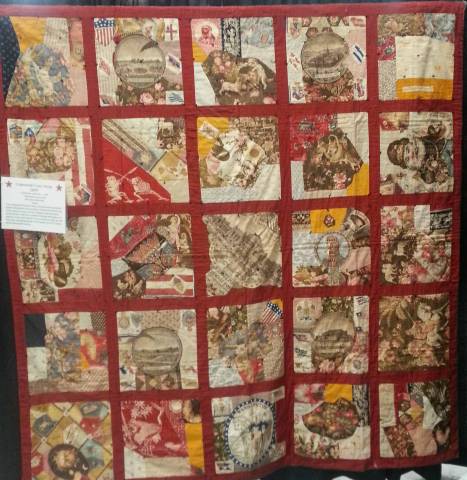 The second quilt in Sue Reich’s exhibition was a Centennial Crazy Scrap Quilt. Different buildings from the exposition are included in the quilt, with crazy conversation prints, such as two frogs fighting. Although the fascination with crazy quilts grew to a height in the 1890s, some trace the origin of the quilts to the Centennial Exposition where the English Embroidery and Japanese Art Exhibit which featured crackle designs got women’s attention.

The 1876 Bradbury Centennial Quilt at the Smithsonian Institution provides a mix of the fabrics and techniques. The quilt made by Harriet Bradbury (at age 12), her mother Emily, and grandmother Maria Silsby created the patriotic quilt from commemorative fabric samples given to Harriet’s father. John Henry Bradbury had been a merchant in dry goods and his firm received the samples from the manufacturers. This quilt contains roller-printed cottons and bandannas many with a printed date of 1876 or 1776-1876. Besides the portraits of George and Martha Washington, as well as Lafayette, it also has the Centennial Flag Banner fabric that started me on this adventure.

The 1876 Philadelphia Centennial Exposition would impact society for centuries to come. Inventions debuted included Alexander Graham Bell’s telephone, the Remington Typographic Machine (typewriter), and the Wallace-Farmer Electric Dynamo (early version of the electric light). In foods, bananas, popcorn, and Heinz ketchup were introduced. In the textile arts, clothing, woven goods and a hand attachment for a sewing machine. Be sure to check out our next book Pioneer Quilts (Available June 2017) to see how else the Philadelphia exhibition changed our world.